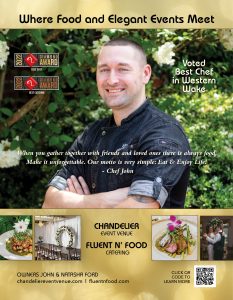 Chef John Ford is the recent winner of BEST CHEF in Western Wake according to Cary Magazine.

Chef Ford completed his culinary training in 2008 at the Art Institutes of Raleigh-Durham, where he fostered his passion for creativity in the kitchen. While completing his degree in International Culinary Arts, he became the Sous Chef of Pop’s Trattoria located in the Warehouse District which is a longstanding member of the Durham food scene. Pops was named Best Italian Cuisine by Durham Magazine, and named “one of the best new hot spots” by Bon Appétit. John also previously worked as Sous Chef at Print Works Bistro of the AAA Four Diamond, locally-owned Proximity Hotel in Greensboro, North Carolina. Part of the Quaintance-Weaver restaurant group that was nominated for a James Beard Foundation Outstanding Restaurateur Award in 2009, Print Works Bistro is the destination of choice for many well-known celebrities. John later went on to Cameron Bar and Grill in Raleigh, NC, where he became Executive Chef. John was featured in several local publications, including Raleigh Magazine and Midtown Magazine for his Saturday night “Farm-to-Table” special. John would go to the Farmer’s Market every Saturday morning and pick local produce to create a one-night-only, first-come-first-serve entrée featuring the NC locally sourced products. John was also invited to participate in the James Beard Burger Blender Project, the highest of all burger achievements in the country. This landed Chef John in FSR Magazine, The News & Observer, and featured on local Television news station WRAL.

Throughout his years of experience, John has accrued culinary excellence in everything from Italian and French to Asian and American styles of cooking. Starting off as a dishwasher, John has held and excelled at every position in the restaurant business. It was during this time that John began to focus his efforts on formulating his own culinary creations. Throughout his years of experience, he has come to value the use of the freshest, highest-quality products and continues to integrate this culinary philosophy. John is a fierce proponent of respecting locally-sourced products and is determined to treat all components with the same care and diligence. To put it briefly, John is a born leader with passion and creativity. 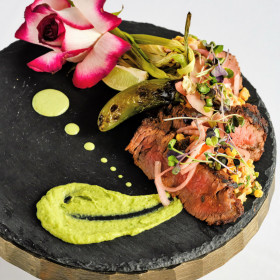 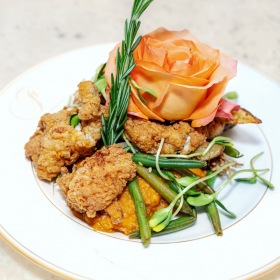 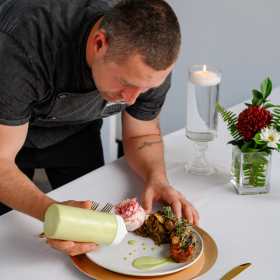 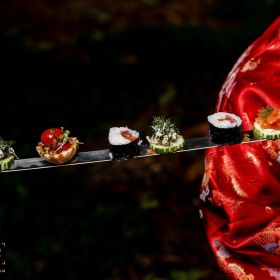 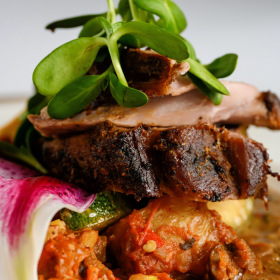 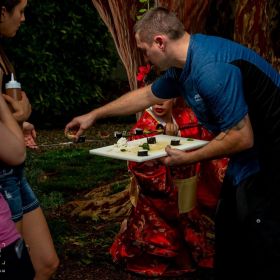 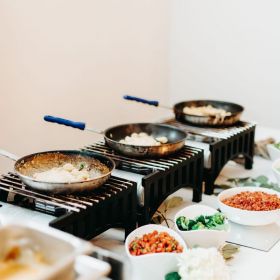 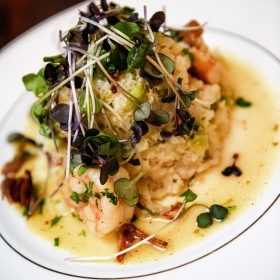 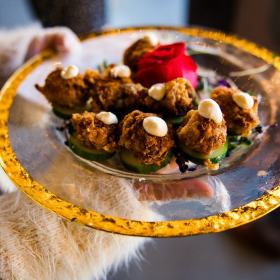 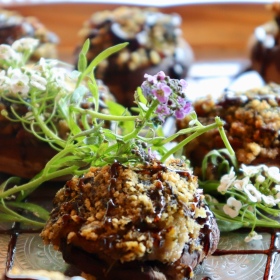 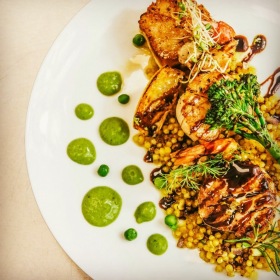 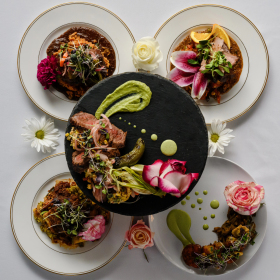 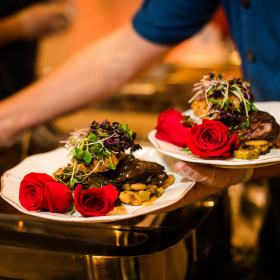 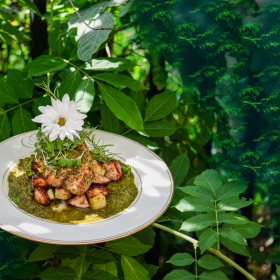 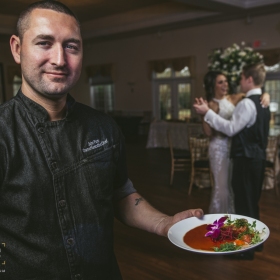 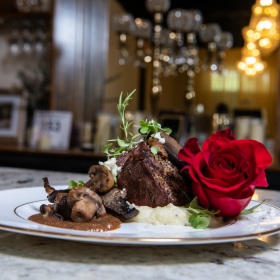 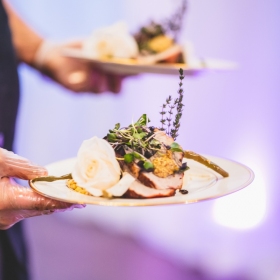 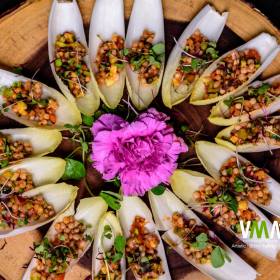 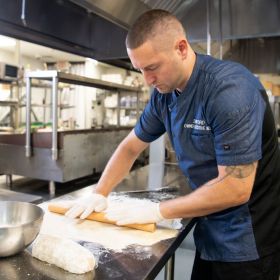 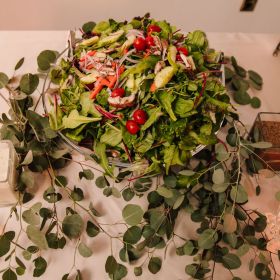 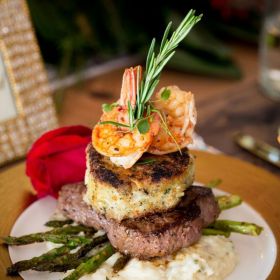 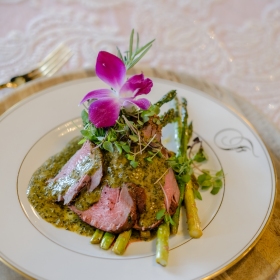 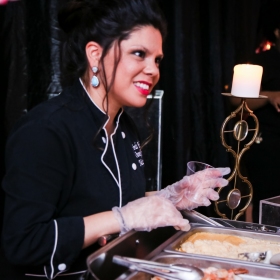 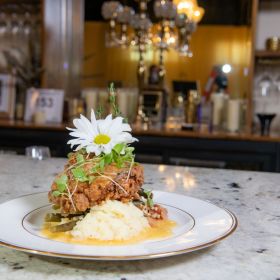 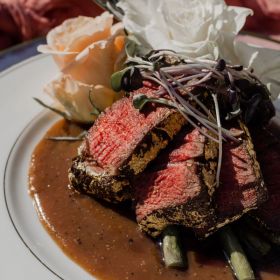 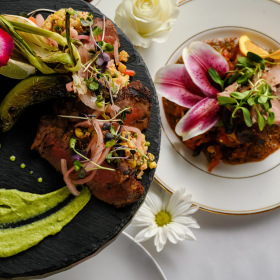 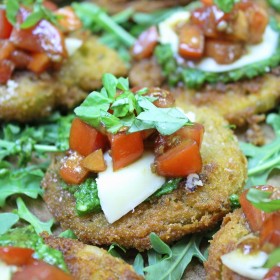 1 2 ►
This website uses cookies to improve your experience. We'll assume you're ok with this, but you can opt-out if you wish.
Accept Reject
Manage consent

This website uses cookies to improve your experience while you navigate through the website. Out of these, the cookies that are categorized as necessary are stored on your browser as they are essential for the working of basic functionalities of the website. We also use third-party cookies that help us analyze and understand how you use this website. These cookies will be stored in your browser only with your consent. You also have the option to opt-out of these cookies. But opting out of some of these cookies may affect your browsing experience.
Necessary Always Enabled
Necessary cookies are absolutely essential for the website to function properly. These cookies ensure basic functionalities and security features of the website, anonymously.
Functional
Functional cookies help to perform certain functionalities like sharing the content of the website on social media platforms, collect feedbacks, and other third-party features.
Performance
Performance cookies are used to understand and analyze the key performance indexes of the website which helps in delivering a better user experience for the visitors.
Analytics
Analytical cookies are used to understand how visitors interact with the website. These cookies help provide information on metrics the number of visitors, bounce rate, traffic source, etc.
Advertisement
Advertisement cookies are used to provide visitors with relevant ads and marketing campaigns. These cookies track visitors across websites and collect information to provide customized ads.
Others
Other uncategorized cookies are those that are being analyzed and have not been classified into a category as yet.
SAVE & ACCEPT